Determining the Age of Deer at a Wisconsin Deer Registration Station 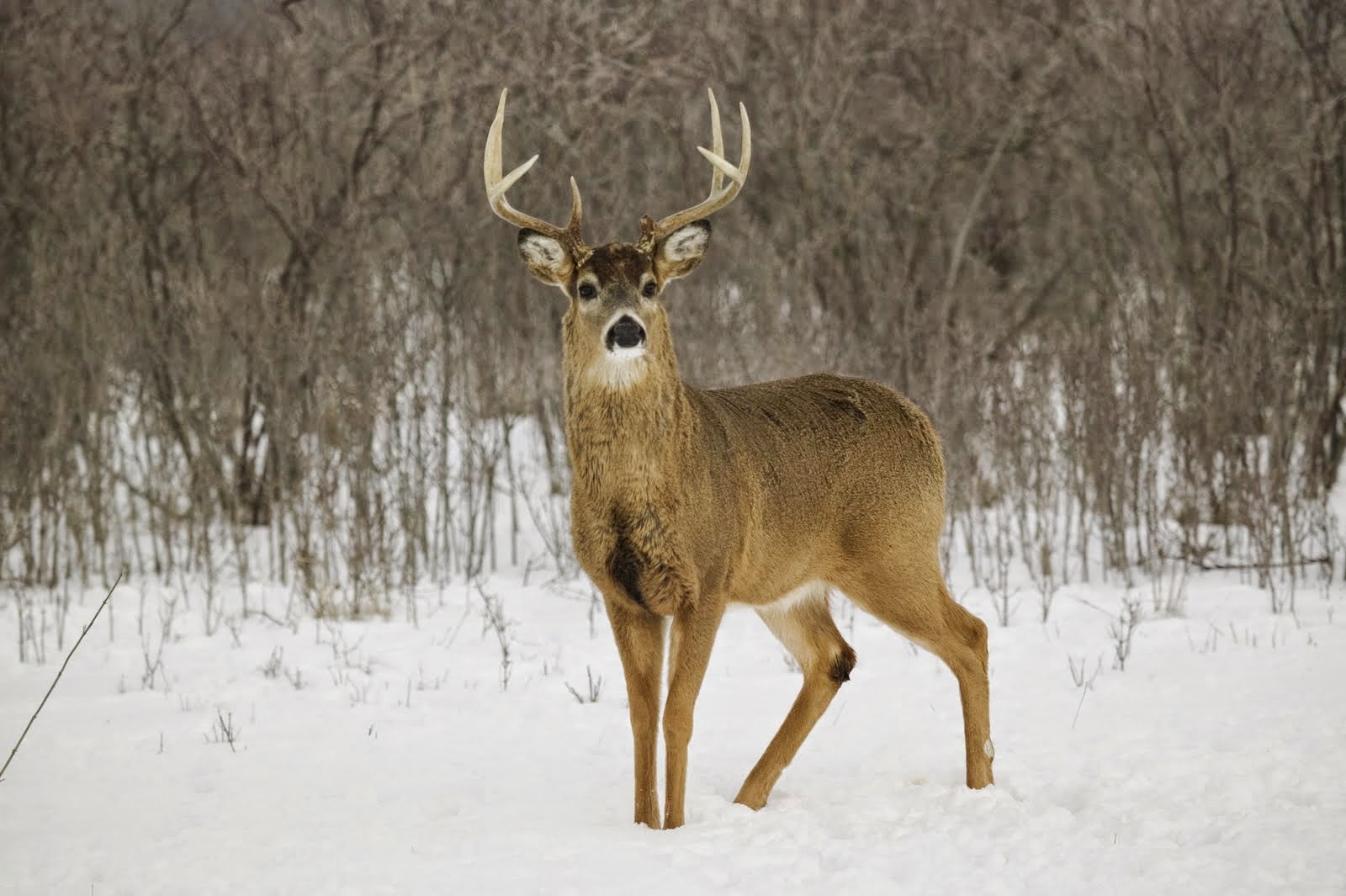 If you grew up in Wisconsin in the 1950s and 1960s you knew that from sunrise on the Saturday before Thanksgiving until sunset on the Sunday after Thanksgiving everything except the bars in Wisconsin stopped operating because it was deer hunting season.

At dawn this coming Saturday everyone in Wisconsin will become an expert on the ecology of white-tailed deer.  Just a mere 24 hours earlier the only deer biologists in the state were men and women hired by the Wisconsin Department of Natural Resources to manage Wisconsin’s deer population.  However at dawn Saturday every janitor, sales clerk, bank president, dentist, and truck driver, along with everyone else in Wisconsin who never studied deer biology as a profession, becomes an authority on the ecology of white-tailed deer.  Those few biologists hired to manage the deer population know not a thing about the animal.  By noon Saturday most of the bars in the state will be filled with deer experts telling stories that make fish stories look lame and most of those stories will carry at least one reference to “those god damned DNR people don’t know shit about deer.”

The other topic that will rage among the bar room debates is how old the deer is that someone has on ice in the bed of their ¾ ton pickup truck outside the bar.  Bar room biologists mostly claim that their deer is a certain age because of the number of tines (points) on the deer’s rack of antlers.  If your deer is “a 6 pointer” then by all means it’s 6 years old.  And if your deer is a “10 pointer” then by god it’s 10 years old.  These pronouncements have no basis in scientific fact.  Their origin is a combination of beer, testosterone, and north woods lore. 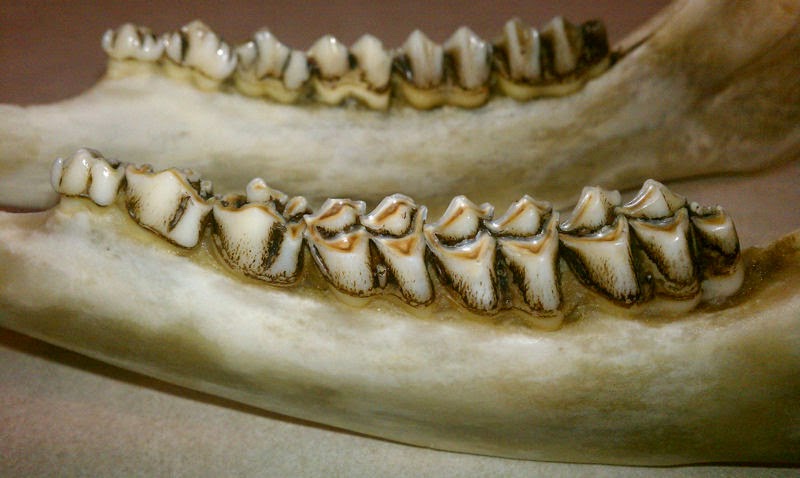 A deer's jaw tells a lot about its age and health (well, its health before it was shot to death).  How old do you think this animal was?

The way deer are aged is by a simple method involving slitting open one cheek, spreading the jaws with a thing called a “jaw spreader” and then looking at 1) the eruption of the last molar on the lower jaw and / or 2) the amount of wear on the remaining molars and on the premolars.  It’s a reliable method that has been around and in use since at least 1963 and its regularly used by most state resource agencies as one aspect of determining the health of a deer population. 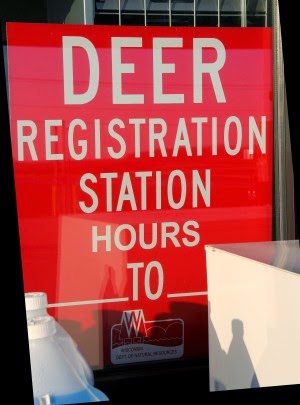 Stop here and register your deer before you get home or you will be subject to a substantial fine.

In Wisconsin when I used to work there each deer hunter who successfully harvested a deer was required by law to have it registered at an official deer registration station before the deer was transported more than (I think it was) 50 miles.  Even if you lived closer, you needed to have it registered because a game warden passing your home and seeing a deer hanging from a tree had a no-warrant-necessary right to enter your property and examine the deer to see if it had been registered.

In November 1976 my now former wife and I managed the Wisconsin Department of Natural Resources deer registration station at a bait and tackle shop along Highway 63 in Cumberland, Wisconsin.  A large sign along the road side told lucky hunters this was the place to stop to register your deer before continuing any further along your journey.

To operate the registration station Ruth and I showed up with data sheets, a clip board, jaw spreaders and youthful enthusiasm.  We saw it as a way to not only collect data on the deer population but also to educate the public about the health of their deer.  It turned out most people could have cared less.

The first hunters arrived shortly after 7:00 that morning.  With the legal hunting season set to begin about 6:30 you had to wonder if maybe a 7:00 a.m. arrival didn’t meet its demise a few minutes before legal season.  However, and regardless, they started coming in regular processions and by the end of the first day of the season we had registered a little more than 150 deer.

Our process was simple.  After greeting the hunter we’d ask their permission to cut open its jaw and examine the teeth.  Most often we’d be asked why and we’d explain that we wanted to use a technique to determine the age of the deer.  Probably 50 percent of the time that statement would be met with a boast of “No need for that kid.  It has 6 points so it’s 6 years old."  We would ask again and usually be given permission and when we did we would show the hunter the graphic from Giles’ “Wildlife Management Techniques” handbook and explain the simple process of aging the deer.

Most deer born in Wisconsin are born between late April and early June.  By the start of their first deer season they are somewhere between 7 and 5 months old.  A year later they are between 1 year 5 months and 1 year 7 months old with the vast majority of them 1 year 6 months old. 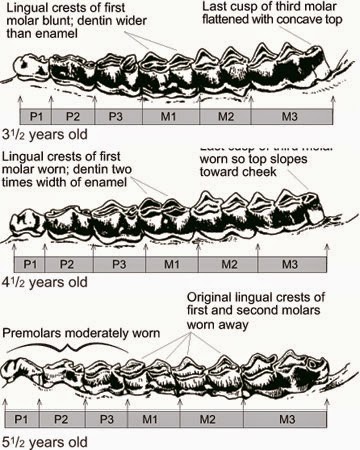 Every wildlife biology student worth his or her salt has spent time studying and memorizing the details on these two charts from Giles' "Wildlife Management Techniques" handbook.

When aging a deer the first thing you look at is the eruption of the last molar on the lower jaw.  If it has 3 cusps (points) on it the deer is 1 year 6 months old or younger.  If it has 2 cusps on it the deer is 1 year 7 months or older.  If there are 2 cusps present then you look at the amount of wear on several other teeth and from that get an accurate idea of the deer’s age.  In general, the vast majority of deer harvested (maybe 60 percent) have 3 cusps on that last molar and are 1 year 6 months old or younger. Of all the deer I have aged the oldest male (buck) I ever saw was 3 ½ years old and the oldest female (doe) was 12 years old.

Usually when you explain this to hunters their testosterone level drops and they ask how it can be that their 8 point monster buck (certain to be the center of most deer stories for the next 11 months) is just a 1 ½ year old baby.  The answer is simple – antler development is a function of nutrition not age.  If Bambi ate well as a yearling then Bambi could have grown some exceptional antlers.  If Bambi didn’t eat so well, then that poor nutrition will be reflected in his antler development.

At about 2:00 p.m. on opening day 1976, three obviously inebriated deer hunters rolled into our deer registration station.  They had in the rear of their pickup truck three recently harvested male deer.  Each of them as I recall had 8 points (about average for most Wisconsin deer).  On asking the first hunter if I could age his animal I discovered a 3-cusped last molar and informed him that his deer was 1 year 6 months old.  He accepted the answer and I went on to the second deer in the bed of the pickup.

Unfortunately for my ex-wife the hunter she had to deal with wanted no part of some 5 foot tall redhead telling him about his deer.

Quietly and respectfully Ruth asked him again if she could age his deer and he finally said, “Sure.  But it’s a waste of your time. Told you that deer is 8 years old.”

Dutifully she slit open the deer’s mouth exposing the jaw. She then placed a jaw spreader between its jaws, twisted it, and exposed the last molars on the lower jaw.  When she did she saw that just like most other deer we had registered that day, the last molar had 3 cusps and she informed him, “Sir, your deer is 1 year 6 months old.”

“BULLSHIT,” he bellowed.  “That deer is 8 years old and you better god damned well write down 8 years old on your sheet there.”

Undaunted she took out her copy of the graphic from Giles’ Wildlife Management Techniques handbook and showed him what a 1 year 6 month old jaw looks like and then showed him his deer’s jaw and the teeth were an exact match.

He responded saying, “You’re full of shit lady” which I generally did not appreciate so I walked over to Ruth and asked if there was a problem.  She explained what she had done to the deer, and told me the hunter’s response (as if I had not already heard it.) She then asked me to look at the jaw and age the deer.

I popped open the jaw, looked at the last molar on the bottom, saw that it had 3 cusps on it and informed the hunter, “Sir your deer is 1 year 6 months old.” I then picked up the graphic from Giles’ Wildlife Management Techniques book and offered to show it to him. 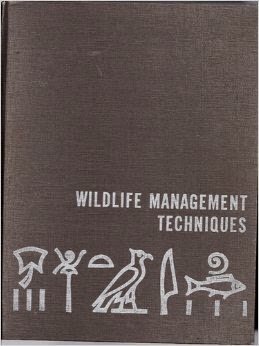 Giles' Wildlife Management Techniques was the bible of wildlife biology when I first started out. Most of the things you needed to know and even more that you didn't need to know, were contained in this giant handbook

Instead of accepting facts, this clown yelled “You fucking college boys don’t know a god damned thing about deer!”  By now he was livid.  “That deer is EIGHT YEARS OLD and you better write it down that way.”  Sensing he was getting a little out of control, and fearing for the safety of my diminutive 5 foot tall 105 pound wife, I agreed with him.

“You know sir, I made a mistake.  You are right - that deer is 8 years old after all.”  I then penciled in “8” in the age column and wished him a safe drive home.

As he drove out of the parking lot I’m sure his story was not only about the 8 year old buck he had shot but also about how he put those two miserable DNR employees in their place.

Before his truck reached Highway 63 and they turned south, I erased the “8” in the age column for his deer and replaced it with a “1.6” to indicate a 1 year 6 month old.  I guess in the long run we both won.