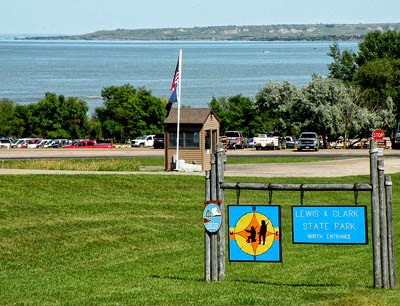 I had not thought about Lewis and Clark State Park in North Dakota for a very long time.  In fact it had almost completely slipped my mind until this morning when I was going through some old records from my life in North Dakota and found a reference to the park in one of my notebooks.

The park sits on the north shore of Lake Sakakawea, a gargantuan and thoroughly unnecessary reservoir that has inundated hundreds of miles of what used to be a free flowing Missouri River in northwesternmost North Dakota.  Lake Sakakawea was built to facilitate the development of a wasteful water development project conceived more than 50 years ago (and still not built today) and called the Garrison Diversion Project.  Garrison was designed to divert Missouri River water east into central and southeastern North Dakota to provide irrigation water for 0.6 percent of the agricultural acreage of North Dakota at a cost of more than $2 BILLION dollars.  The Benefit/Cost ratio for Garrison at the peak of its supposed usefulness was less than 0.5 to 1.  In other words, with a B/C ratio of .50 the American taxpayers would receive in benefits 50 cents for every dollar they invested in the construction of Garrison.  The project would also negatively affect nearly 20 National Wildlife Refuges and destroy more than 20,000 acres of native prairie – all to provide irrigation water to hard red spring wheat so you can have toast with your coffee in the morning.

Lewis and Clark State Park, on the north shore of this monstrosity known as Lake Sakakawea is about 900 acres of largely native habitat that was most likely set aside as mitigation for the destruction wrought by the construction of Garrison Damn and the resultant flooding of the Missouri River.  Ironically the two explorers after which the park is named, Lewis and Clark, would likely object strenuously to the destruction of the forest and river through which they paddled more than 200 years ago.

During the 1982 bird nesting season I was tasked with getting population estimates of song birds and raptors nesting in wooded draws in the western part of Nebraska.  Wooded draws are tiny strings of woody vegetation usually no more than 10 acres in size and generally in intermittent waterways or drainages in the highly arid western part of Dakota’s and eastern Montana.  Concern was expressed at the time about how much environmental damage would be brought on by anticipated coal development in western North Dakota and especially in how much damage would be done to songbird populations in these sensitive and highly unique woody vegetation communities. My job was to determine the species richness (number of species present) and to calculate population estimates for each species in these unique woody habitats. 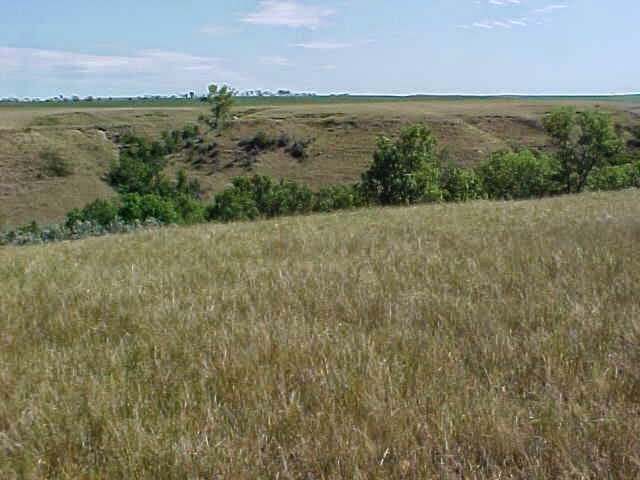 A classic wooded draw on a prairie landscape in western North Dakota.  I was amazed by the diversity of birds and their population densities in these seemingly insignificant patches of woods.

In those days I had the enviable position of being the nongame bird research biologist at the highly prestigious Northern Prairie Wildlife Research Center in Jamestown North Dakota.  At the time Northern Prairie was one of the preeminent wildlife research facilities in the world and me, a snot-nosed kid from the north woods of Wisconsin, had the honor of working there.

My pattern in those days was to leave home on Monday mornings and drive to western North Dakota where I would sample bird populations in randomly selected wooded draws Monday evening (for crepuscular birds like owls and thrushes).  I would then be out in the field before dawn on Tuesday through Friday sampling bird populations until late Friday when I would return home.  At the conclusion of the research I published this paper and one other in scientific journals and gave a paper about my findings at the Cooper Ornithological Society meeting in Arcata, California.

As a Federal employee I received a certain amount of money each day for my hotel lodging and for my meals.  I think at the time the maximum I could receive for a hotel was $22 a day and $12 a day for food.  If I spent more than the maximum of $34 a day, then I paid for the difference out of my own pocket.  If I spent less than that amount each day I didn’t get to pocket the difference.  Instead I saved the government X number of dollars each day I was away from home.

To say that my colleagues and I were despised by the agricultural community in North Dakota was an understatement.  The most commonly used phrase, usually uttered with a few expletives attached, was to refer to us as “leeches" on their tax dollars.  This came from overly subsidized wheat farmers who rarely paid any taxes themselves and had government support programs (provided by Congress) to ensure that they received a certain amount for each bushel of wheat produced.  If they didn’t receive that amount at the market the government would make up the difference.  If they produced too much wheat they still received that base amount but now the government paid to store their wheat until the price was better and they could sell the surplus production.

Yet we were the leeches.

In late June 1982 I had a series of wooded draw sample plots on which I wanted to count birds that were located along the north shore of Lake Sakakawea.  The nearest town in that area that had habitable hotels was Williston and if I stayed there, the Super 8 Hotel cost $22 a night which was the per diem maximum.  However one trip I had several sample plots not far from Lewis and Clark State Park and to save time (and money) I decided to camp in the state park.  The cost of a camp site was $2.00 a night and it was much closer to my sample plots than the Super 8 in Williston 25 miles away.

I remember well the day I camped there.  About 4:00 p.m., I pulled into the park in my vehicle with a US Fish and Wildlife Service emblem on the side and with US government license plates on the front and back.  Because I was a Federal employee on official duty I was given free access to the park but paid the person at the front gate $2.00 for the camping fee and I then received a receipt.  From the front entrance I then proceeded to the campsite where I pitched my 2-person tent at a site not far from the water’s edge. 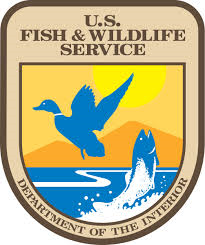 We used to refer to my agency's emblem on the side of our cars as "The Target" because it gave antagonists something better to aim at.  By the time I moved to Nebraska we took the targets off our cars for the safety of employees and when I supervised our office in Ventura, California the emblems were removed and I would not let my employees wear the official Fish and Wildlife Service uniform because of the same safety concerns.

After completing my camp set up I sat at the picnic table provided with my site going over my notes and data sheets from that morning’s bird censuses in wooded draws several miles away.  As I sat there crunching data a man in a neighboring camp site strolled over my way. I assumed he was coming to have a friendly chat but instead he was on a mission.

“Saw your car there and wondered where you’re from,” he started.

I told him who I was, where I was from and what I was doing.

“Well what the gives you the right to camp on my tax dollar?”

I asked him to explain what he meant and he went into a diatribe about me a Federal employee pitching a tent and camping in a state park at the expense of him a loyal and no doubt heavily taxed wheat farmer (it turned out that he was a wheat farmer from nearby Ray, North Dakota).

I long ago learned that, as we used to say in northern Wisconsin, “When you get in a pissing match with a skunk all you get is sprayed on,” so I opted for being informative rather than combative.  I explained my research project, why I was doing it and why I was in the State Park.

Rather than chill out he only became more livid now promising to call the governor (who had no authority over Federal employees) and the two US Senators from North Dakota (both life-long lovers of wheat and despisers of government employees).  Having heard that line so many times before in North Dakota it no longer phased me and that rather upset my antagonist.

Although tempted to give him the addresses and phone numbers of both US Senators (I carried them with me at all times for when I received these veiled threats) I instead started to pull up my tent stakes and leave the state park.

A large grin passed over the wheat farmer’s face as he saw that he had apparently won.  Without saying anything negative I just explained my position.  I said, “Sir, you’re right.  It is not correct for me to be camping at your expense.  When I travel the government gives me up to $22 a night to cover my lodging expenses.  I chose to camp here for $2.00 a night saving you $20 but since my presence bothers you so much I’m going to pull up camp and drive to Williston and stay at the Super 8 Hotel for all $22.00.”

Dumbstruck, my antagonist quickly realized that camping at “his” expense was a lot cheaper than me spending $22 of his hard earned dollars to stay in a hotel.  It was hilarious then to see him walk over to my tent and start putting the tent stakes back in the ground.  Now suddenly he didn’t want me to leave.

A year earlier, in a similar situation in Pembina, North Dakota I explained to a group of antagonists that if they paid taxes the average American taxpayer contributed 2.3 CENTS (2 point 3 cents) out of their total tax bill to the operation of my entire agency and therefore the cost of my existence was almost negligible.  I was prepared to tell this fellow the same thing but figured one lesson in tax policy was enough for him for one life time.
Posted by Craig Faanes at 10:23 AM