A Eulogy for a Baseball Friend 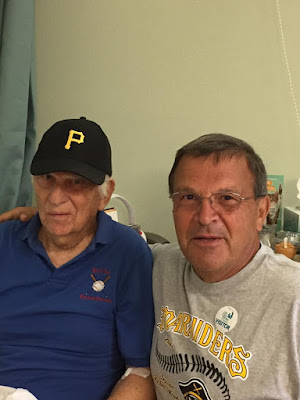 The Bradenton Marauders first home game was on April 8, 2010.  They faced the Fort Myers Miracle and Bryan Morris, who is now a reliever with the Miami Marlins, threw the first pitch for the Marauders.

Bryan faced Drew Thompson as his first batter and Bryan’s first pitch was a perfect strike.  It cut the plate in half belt-high and Drew watched it fly past him.

I was seated in Box 1, Row 1, Seat 1, directly behind home plate; prime territory for heckling the opposing team.

Maybe a nanosecond after Bryan’s pitch raced past Drew Thompson and smacked into Tony Sanchez’s catcher’s mitt, I heard this voice behind me yell out “If you’re going to watch, buy a ticket!”

That was one of my heckling lines and it made me curious who was using my stuff!  I looked around and saw a white-haired gentleman in a baseball cap holding a scorecard in one hand and a piece of pizza in the other.  I didn’t think anything more of it.

In the top of the 3rd inning, Miracle batter Ramon Santana had a count of 0 balls and 2 strikes against him when I heard that same voice behind me say, “Maybe you should try T ball next time?” That was another one of my lines.

Ramon promptly watched the next pitch sail past him, belt high, and the umpire called strike three.

From behind me I heard “See, Ramon, I told you to try T ball.”

This good natured heckling continued as this unfamiliar person began using some of the same lines I used to annoy the Miracle batters.

Extremely curious about this fellow heckler sitting a couple rows behind me I stood up during the 7th inning stretch and walked to him.

With an obvious New York twang to his voice my fellow heckler introduced himself. “I’m Bob Nolte,” he said.  “I used to be a baseball coach.  Now I just like to watch baseball games and heckle.”

We became instant friends and for the next 6 Marauder seasons Bob could be counted on to be in his seat, 3 rows behind home plate, for nearly every game.

Bob absolutely loved the Bradenton Marauders.  Once our kids moved up to Double AA Altoona, or AAA level Indianapolis, Bob wasn't interested.  But if a kid was in a Marauders uniform then they might as well have been his own children.

It didn’t matter if it was 95 degrees at 1 pm on a Sunday afternoon, Bob was there with a towel wrapped around his neck and his baseball cap on.  Lightning and thunder would roll in and rain would fall in buckets and Bob would just pull out his rain poncho and sit there ready for the game to being again.

Bob was the consummate perfectionist when it came to baseball.  He kept score of every game and he kept pitch counts on every pitcher.  Many were the times I’d feel a tap on my shoulder in the 4th or 5th inning and there would be Bob standing behind me saying something like “Can you believe it?  Our pitcher has thrown 80 pitches already and we don’t have anyone warming up in the bull pen!  What are the coaches thinking?”

It used to annoy Bob when Marauders batters weren’t swinging at the first pitch or when they weren’t leading off third base far enough.  No matter what the Marauders did, Bob had an opinion.  I can’t count the number of times he wrote summaries of games and summaries of pitch counts and would send the information to the Marauders coaches with recommendations on how to do things better.

They humored Bob more than they listened to him but that didn’t stop him from trying.

One blistering hot Sunday afternoon while we were playing the much-despised St. Lucie Mets, Bob walked over to my seat between innings and began pointing out all the things the Marauders were doing wrong.  Listening to him I finally asked, “Bob, have you ever seen a baseball game played correctly?”

His response was classic when he said “Never.”

But that was Bob. After moving to Florida a few years ago baseball became the center of his life.  He watched baseball with as much passion as I’m sure he played it as a kid and coached it as an adult. And he heckled with the same amount of passion.

Bob also enjoyed lamenting the current state of affairs on the news.  No matter what the issue Bob had an opinion about it.  Once while standing in line waiting for the gates of McKechnie Field to open before a game Bob was ranting about something he had seen on the news that afternoon.  He commented saying “If this keeps up Hillary is going to win the election in 2016!”

I couldn’t resist and responded saying “God, Bob, I hope you’re right!”  Flummoxed by my response he changed the subject to who was pitching for the Marauders that night.

In the movie “Fever Pitch” fanatic Boston Red Sox fan Jimmy Fallon takes Drew Barrymore to Fenway Park for her first Red Sox game.  Fallon introduced Drew to all the people sitting around his season ticket seat area and said “This is my summer family.”

For many of us at McKechnie Field, Bob was the epicenter of our summer family.  Invariably when I would arrive at the field I’d see his white van parked in the same spot by the fence. If he wasn’t there an hour early I’d worry and call him to make sure he was ok.  It was completely out of character for Bob to be late for a game let alone miss one.  If Bob wasn’t at McKechnie Field for a game someone checked in on him.

It’s what you do with family and Bob was a big part of our baseball family.

When Dave Hilsheimer told me about the stroke that felled Bob, I raced off to Life Care Center of Sarasota to see him.  When I walked in his room I saw his niece Dawn and neighbor Becky standing over his bed and there was Bob dressed in a Bradenton Marauders t shirt, and wearing a Pittsburgh Pirates baseball cap.  In his left hand was a baseball that he kept squeezing.

I stopped in daily after that to give Bob updates on the Marauders scores and to check on his progress. Although he could no longer speak, his facial gestures told me he was well aware of what I was telling him.  His eyes would brighten when I told him of a win, and he would grimace when I told him about a loss.

Despite the right side of his face being paralyzed, I know for an indisputable fact that he said “Damn it” one morning when I told him the Marauders lost to the Palm Beach Cardinals the night before.

I’m going to miss seeing his van parked in “his” spot, and miss seeing him in his Marauders cap as he kept track of every pitch.  I’ll miss kidding him about eating too much pizza before every game and I’ll miss asking about the pitch count and hearing an analysis of how many balls and strikes have been thrown and why nobody was warming up in the bull pen.

Mostly though, I’m going to miss having Bob in my life.  The last time I saw him, just a few hours before he stepped up to the batter’s box for his final appearance at home plate last Saturday afternoon, he was still squeezing a baseball in his left hand.   I told him that when I saw him tomorrow, I wanted him to tell me stories about watching Jackie Robinson play during his first year in the Major Leagues.

Tomorrow didn't arrive for Bob, but I have a feeling that when I see him again, he will be holding a scorecard in one hand and a piece of pizza in the other, and he's going to tell me some story about watching Jackie Robinson in his first year in the Major Leagues.
Posted by Craig Faanes at 10:06 AM 1 comment: