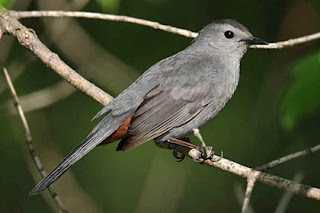 At 9:30 this morning I heard the first Gray Catbird of the fall migration as it called (squawked?) from the infestation of Brazilian Pepper that surrounds my wetland. Welcome back!

If the past two winters are any indication I can now expect to at least hear and probably see Gray Catbirds out of my lanai through April 20, 2011, or so.

One theory about the origin of this species name can be tested by listening to its voice. Go to this site then scroll down to "calls" and then click on "mew call". The mew call sounds surprisingly similar to the mew of a domestic cat. And from my view point its a lot more tolerable than a domestic cat.

As the range map for this species shows it nests throughout the eastern United States and Canada west to British Colombia and Utah. In its eastern range Gray Carbirds are most commonly found nesting in thickets of woody vegetation. In northern Wisconsin they are particularly fond of "edge" habitats and especially recently logged areas that are rapidly regenerating. In Florida, this species has been recorded nesting as far south as Sarasota County. However the birds I'm listening to now were not here throughout the summer.

Now for the next six months I can expect that each morning when I get up at least 2 and if past winters are any indication, up to 5 Gray Catbirds will be climbing around in the thick vegetation by my wetland just being Catbirds. As frugivores they will be gorging themselves on the abundant fruit of Brazilian Pepper when those seeds are available in a month or so. Unfortunately there is more than enough Pepper here to sustain them for a lot longer than 6 months.
Posted by Craig Faanes at 9:44 AM 1 comment: