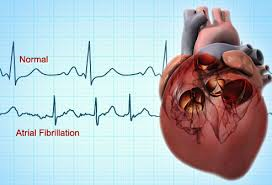 Tonight at 9:00 pm will mark the 17th anniversary of my first episode of atrial fibrilation! This is the "irregular heartbeat not caused by a heart valve problem" you hear about on heart medicine advertisements.

When I went into A fib my heart rate increased to 208 beats per minute. The sensation was best described as feeling like a fish flopping around in the bottom of a boat in my chest. It took 18 hours to convert me to a normal heart rate and rhythm. The cause? A cardiologist who examined me said that I had overdosed on caffeine. Given the amount of coffee I drank then (average of 12 large cups a day) it wasn't hard to accept the diagnosis.

17 months later I went into A fib again. This time in my office at 7 in the morning. I was hauled away from 4401 North Fairfax Drive in Arlington Virginia in an ambulance. It took 20 hours to convert me and afterward I was put on at least 4 different heart meds to keep it from recurring.

But it did...7 more times including twice while on a cruise ship in the middle of the Atlantic Ocean. In June 2015 I had a cool procedure called "catheter ablation" that essentially cured me of A fib although last week I had a minor episode again.

The moral of this story is that if you like coffee be very careful with the amount you consume. If not you might wind up in an Emergency Room with your heart feeling like its going to jump out of your chest!
Posted by Craig Faanes at 8:14 AM No comments: